ABofC to Meet With LGBT Deputies 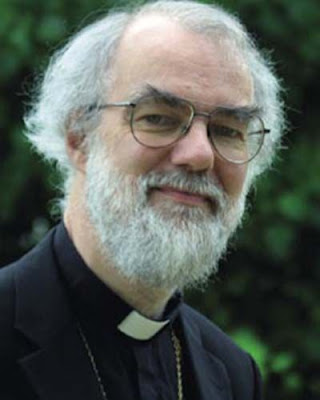 this just in from ENS:

[Episcopal News Service] Eight members of the Episcopal Church's House of Deputies are scheduled meet privately with Archbishop of Canterbury Rowan Williams at General Convention in a session that is intended in part to address lesbian, gay, bisexual and transgender (LGBT) issues in the church.

General Convention meets July 8-17 in Anaheim, California, and Williams will be present July 7-9.

The session is not an official convention meeting and thus there has been no announcement of the plans. However, when contacted by Episcopal News Service, the Rev. Canon Michael Barlowe of the Diocese of California confirmed the details.

Barlowe said that he and the other deputies understood the meeting was to be brief and private, but that it was not a secret.

"It's not a summit or constituted in an official way," he said. "We don't expect to issue a communiqué or anything like that."

Instead, Barlowe said, he hopes the meeting will be a chance for dialogue and a chance for Williams to hear about the ministries of eight Episcopalians whose "significant fundamental characteristic" is "our deep love for the Episcopal Church within the Anglican Communion." The eight deputies' lives reflect the broad range of ministry of all Episcopalians, he said.

Barlowe set the meeting in the context of the communion-wide Listening Process, which is intended to hear all sides of the issues concerning human sexuality and the church.

Williams, Barlowe suggested, has not had a chance to hear about the broad range of ministry and leadership in which LGBT Episcopalians are involved.

There's a larger hope attached to the meeting, according to Barlowe.

"Anytime committed Christians come together, something remarkable happens," he said. "What comes to the fore is the commitment to be better bearers of the good news of Christ."

The chance to have such a meeting, he said, is typical of the way leadership in the Episcopal Church seeks ways to move the mission and ministry of the church forward by trying to form partnerships with "other passionate ministers such as Archbishop Rowan."

Barlowe, who has been a candidate in episcopal elections in the dioceses of California and Newark, said that he first raised the possibility of a meeting with the archbishop when the California deputation was discussing Anglican Communion issues. His colleagues encouraged him to pursue the idea and Barlowe says he sought the support of other LGBT deputies.

When he contacted Presiding Bishop Katharine Jefferts Schori or House of Deputies President Bonnie Anderson to ask for time with the archbishop, the request came with the backing of many of those deputies, he said.

Jefferts Schori's and Anderson's willingness to help bring about the meeting "is totally consistent with their leadership" of the church and their goal of fostering "serious and respectful conversation," he added.

The presiding officers did not appoint the deputies, Barlowe said. Instead, he was asked to put the group together. He said he consulted with others and sought deputies who reflected the range of geographic, age, and ministerial diversity of those people who supported the request for the meeting.

In addition to Barlowe, the deputies are:

The Rev. Eric H. F. Law, known for his work in multicultural leadership training, has been helping the deputies prepare for their meeting, according to Barlowe, and Law may attend the session with Williams.

Because they do not all know each other, Barlowe said, the group has been presenting to each other their "ministry biographies." He called that experience "emotionally powerful."

"Once again, I've been overwhelmed by just how committed the ministers of this church are," he said, adding that hearing the deputies' stories "made me incredibly thankful yet again for being part of the Episcopal Church."

-- The Rev. Mary Frances Schjonberg is national correspondent for the Episcopal News Service.
Posted by SUSAN RUSSELL at 3:37 PM

Imagine that! The names aren't being witheld. [koff]

Let's hope they do not drown in the Fudge ;=)