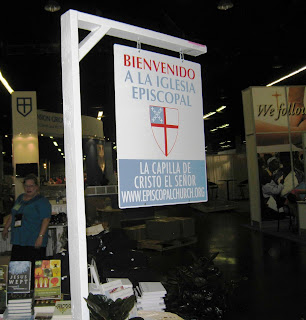 From coast to coast, their parishes carry a sign: "The Episcopal church welcomes you." And yet, some among the gay faithful have felt that greeting included an invisible asterisk: "Unless you are a gay or lesbian couple" who wants to be fully included in parish life of the church.

Not anymore, according to the Rev. Susan Russell of All Saints Church in Pasadena, Calif. "We feel the asterisk has been erased," she said, referring to one resolution adopted last week in Anaheim, Calif. where the Episcopal Church met in the general convention.

Russell is president of the organization Integrity, the denomination's national gay and lesbian caucus, and an LGBT advocacy group.

There were, in fact, two resolutions approved by the Episcopalian gathering. The first allows for the consecration of openly lesbian and gay bishops. The second measure authorizes bishops to bless same-sex unions.

"What's significant about what happened at the Episcopal General Convention is that finally we are telling the truth about who we are," Rev. Russell said, speaking from her cell phone July 17. "I am so proud to be part of a church that at this point in its life has decided truth and inclusion and justice are prevailing enough values that we are wiling to tell the truth about that even when it's a challenge to our wider Anglican family."

How come you never talk about Lord Jesus Christ and his message of Salvation for those who Repent & Confess His Name?

As you go blithely on your way...
please answer to:

Before attacking, please justify with God's Word, all of the above.

While it's always a delight to have you stop by, LG, just to continue the "me & mine" theme, this would be MY blog and I'll be deciding what I decide to respond to using what methodology.

Maybe it's time for you to get your own blog where you can set the rules!

It's free and REALLY easy to set up ... http://www.blogger.com

LGM, you may have an argument with some policies passed by the church. But including in your list a disgusting crime alleged against a gay man in NC who may be Episcopalian has NOTHING to do with the church and is nothing that Susan R needs to answer for. It is a cheap and inflammatory shot and you should be ashamed of yourself.

Indeed, thanks to "This week in Holy Crimes" I can easily match that with plenty of straight pastors committing crimes in the last 7 days (citations at the link). I am sure that you will expect their churches to personally justify these crimes as well, no?

Florida: Pastor Samuel Darin Taylor charged with defrauding his church of over $250K.

Florida: Pastor Donnell Dewitt Williams charged with money laundering after probe reveals $400K in loans processed in the namea of his congregants.

Tennessee: Pastor John Franklin McCarroll charged with indecent exposure at public park. Extra bonus: McCarroll frequently preached against gay marriage. Extra hilarious bonus: The motto of McCarroll's ministry is "Come as you are, but don't leave like you came."

Pennsylvania: Christian songwriter and schoolteacher Heather Lynn Zoe charged with having sex with minors. Bonus: Songs on Zoe's debut CD include Face Down and Over And Over.

This week's winners:
India: Father Thomas Kottoor, Father Jose Puthrukayil, and Sister Mary Sephy charged with murdering Sister Mary Abhaya after she walked in on them having a threeway. Police say the Holy Trinity beat Sister Abhaya with an axe handle and threw her into a convent well where she drowned.

Those are just the religious crimes. Do you really want me to look up crimes committed by straight fathers against their children?

IMHO you owe Susan an apology for your nasty tone. If I were she I wouldn't have posted your screed.

Marshall, that's just incredible. All that from one of the "orthodox" whose god is nothing more than their own precious selves and who cannot live in a world that involves anything other than themselves.

You're sad, you're silly, and you're nothing to do with God.

"Maybe it's time for you to get your own blog"

LG, this is actually good advice. As for me, I got so sick & tired of "Christian" blogs contributing more anger and bitterness into the world that I had to come to a decision; do I get wrapped up in it or do I start a blog focused on the LORD. I chose B.
Ironically, the majority of people who frequent aren't Americans.

Speaking of the Bible, LG, you could do yourself and all of us a favor by renting the film "For the Bible Tells Me So."

Others have responded to your disgusting attempt to link progress on the inclusion of all the baptized with the crime (allegedly) committed by Frank Lombard.

I'll respond to your assertion about Bishop Harris. I think this is the second time you have repeated this charge. In doing so, you are bearing false witness against your neighbor (see Exodus 20:16). Susan has provided the complete transcript of the bishop's sermon, and if you have the courage to read it, you'll see that she does not "deny" the sacrament of marriage. She expressed doubt about the nature of the emphasis placed by some on the sacramental character of marriage.

I find it interesting that you are apparently insisting on a "Catholic" view of marriage as a sacrament but are upset by Bishop Jefferts Schori's essentially "Catholic" argument that salvation is not an individual transaction achieved by praying a confession of faith.

It appears to me that your focus is not on Truth, but on attacking anything you think you can attack in what is taught by TEC bishops.

It appears to me that your focus is not on Truth, but on attacking anything you think you can attack in what is taught by TEC bishops.

They will and have twist and spin anything to score a point.