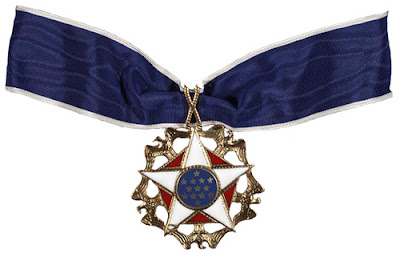 (AP -- source link)President Obama announced today the "agents of change" he plans on honoring with the 2009 Presidential Medal of Freedom on Aug. 12.

The 16 individuals that will be given America's highest civilian honor were chosen because they have "changed the world for the better" and set "a standard to which we all should strive," he said.

"These outstanding men and women represent an incredible diversity of backgrounds," Mr. Obama said, in a statement released by the White House. "Each saw an imperfect world and set about improving it, often overcoming great obstacles along the way."

Hunh. There's a gay guy, but he's dead. What do the tea leaves say about that?

Whoa! At least, there IS a gay guy.

I think in part it highlights the complete lack of any national leader or figure for the GLBT movement since Milk. No wonder it's all in disarray.

How about Jack Kemp? He's been dogged by gay rumors for several decades now.

And as for a national gay leader: that's been one of the great strengths. It's all come from generally unknown, or briefly known, people. It's been a truly bottom-up phenomenon with people stepping up to the plate when called upon.

And that's why it's in disarray and a disaster. And as reported, theother side is laughing.

Billie Jean King is an out lesbian, although that's not what she's being honored for. But I agree that we need national leaders.