Still digging through email and voice mail and getting ducks in a row to move beyond what happened in Anaheim and forward with all the OTHER work claiming my attention. But decided to take my late-lunch-break and put together some random bits and pieces from the 76th General Convention of the Episcopal Church just behind us. So here goes:

From the House of Bishops:
. 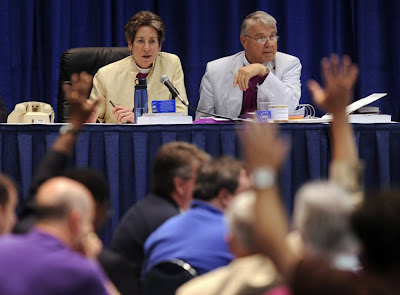 +Mary Gray Reeves (El Camino) reminding the House of Bishops during the D025 debate that there is no integrity in considering entering into a covenant with anybody if you're not willing to be honest about who you are.

+Gene Robinson (New Hampshire) noting the holiness of the Indaba conversations the bishops had over crafting a C056 substitute and saying "if this is what it was like at Lambeth, I'm even sadder that I missed it."

+Neil Alexander (Atlanta): "The church is very much engaged in this conversation and wants to do the correct and thoughtful and prayerful thing about it. I think that's pretty clear."

Meanwhile, in the House of Deputies, a couple of "finest moments" included:
. 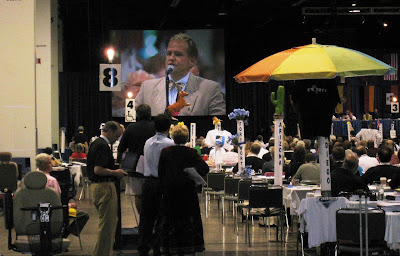 Rebecca Snow (Alaska) on D025: "It does not require anyone to do anything except to acknowledge the reality on the ground and to accept our polity, which we are so proud of, and the fact that we are governed by our Constitution and Canons and a discernment process that allows us to be open to God's calling of all baptized persons."

Olivia Adams (Western Michigan) said she was an Episcopalian because the Episcopal Church had welcomed her mother, who is a lesbian, and her partner. "If we all support this resolution," she said, "families like mine will no longer have to hide, and the church will grow."

Conversations "out and about:" 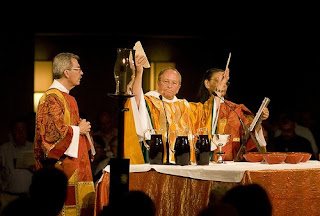 The woman who stopped me in the worship hall to thank Integrity for our work and then to share that she had attended the Integrity Eucharist with her 14 year old son -- and that afterwards in their hotel room he had come out to her.

"I've known he was gay since he was about 4," she said, her eyes welling up. "And have been waiting for him to figure it out. The fact that he came to himself in the context of a celebration of the Eucharist -- that he's never going to have to wonder if his church or his family will love and accept him as he is -- I just can't thank you enough."

"He's a really great kid," she said, wiping her eyes. "And he's going to be FABULOUS gay man! "

So it came to pass that it was our Integrity Chaplain Randy Kimmler's birthday while we were in Anaheim: Sunday, July 12, to be exact. And so, as we were leaving worship Sunday morning and I spied him in the crowd, of COURSE I said -- in my best "outside voice:" IT'S THE BIRTHDAY BOY! (And began to sing "Happy Birthday, to you ...")

Of course everybody joined in ... but not just THAT ... several bishops came over and said, "We don't just SING birthdays, we BLESS them!!" And here they are: doing precisely that! 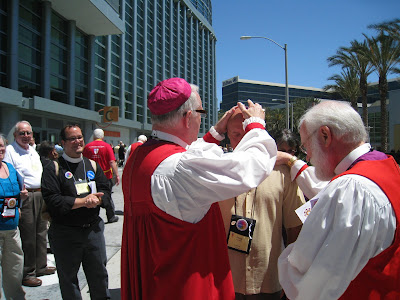 (Quite the contrast to those who remember other bishops having OTHER reactions to LGBT leaders in their midst back at Lambeth 1998!)

Getting a GC "doggie fix"
. 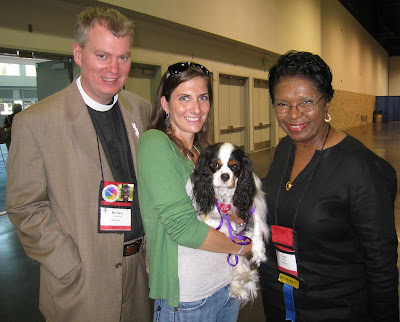 For some of us, one of the great sacrifices we make to do the work of General Convention for two whole weeks is missing our canine companions. Here are Michael Hopkins and Diane Pollard getting a little "doggie fix" from the Cowperthwaites' pooch "Bishop." (And yes, Bishop is an "It's A Girl" bishop!)

An absolute highlight was the presence of former Presiding Bishop Ed "In this church there will be no outcasts!" Browning at the Integrity Eucharist: 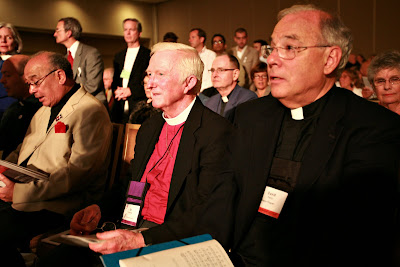 And +Tom & Ann Ely joining "Team Integrity" for our appreciation dinner on the last night of GC2009. 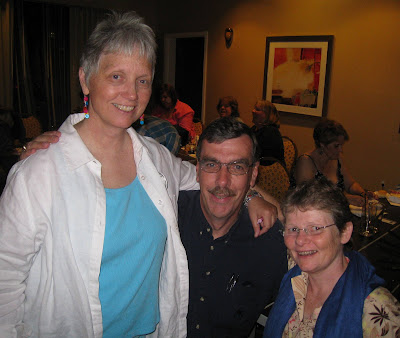 Bishop Ely was the one bishop who came and found us -- "us" being what was left of Integrity Team 2006 -- after the devastating last day of General Convention in Columbus. His pastoral care and determination to stick with us through the struggle was a TRUE "Balm in Gilead" ... and what a joy to have him with us for a very DIFFERENT last day in Anaheim!

Finally, here are some random photos of bits and pieces of moments that stick in my mind and memory as we move "onward and upward" ... forward into God's future!

Posted by SUSAN RUSSELL at 3:25 PM

Once again, Susan, I have relied on your blog to inform my own thinking and to grace my own blogpost. I quoted your story of the 14 year old boy on my own blog, http://theliberalspirit.com

That photo of Bishop Gene Robinson is beautiful....