One of the great things about being "on vacation" is you get to do what you want to do rather than what your "to do" list tells you to do. And one of the things I did this morning ... over a leisurely second cup of coffee ... was check out some of the blogs I don't always get time to read.

I found a couple of "keepers" and want them to commend them to you here: 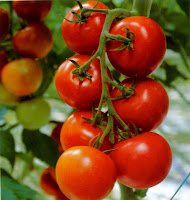 Picked and chosen by Lauren Stanley over at Daily Episcopalian -- a lovely reflection on picking tomatoes in her family garden:

As I searched, I was surprised to find brilliant red ones buried deep in the middle of the cages; how, I wondered, could they have ripened so beautifully, with so many leaves and other tomatoes blocking out the sun?

As I picked these deeply buried tomatoes, I realized that they blossomed, they ripened, because that’s what they are supposed to do. Defying horticultural logic, they took what little light they received, and turned it into something beautiful, a fulfillment of God’s design and wishes for them in creation. It didn’t matter whether anyone found them or not, ate them or not, admired them or not; their reason for being was simply to blossom, to ripen, to the best of their abilities, according to their genetic makeup.

And then it hit me: What happened with these tomatoes in my family’s backyard is the same thing that is happening in the Episcopal Church right now. Those who have been buried deep, lacking sunshine and warmth and all the blessings of the Church community have, despite all those handicaps, flourished. For the first time, the Church has reached down deep and unearthed those people and welcomed them and celebrated them and said to them, “You are so beautiful.” 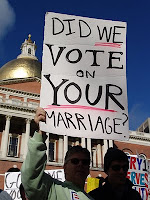 My chosen lifestyle by Elizabeth Kaeton over at Telling Secrets

And, why should that choice condemn you to a life of discrimination?

I don't know how many married people have to remember to pack their marriage certificates when their loved ones go to the hospital, but I would bet solid money that Rowan Williams doesn't give it a thought when his wife, Jane, is ill.

And now, back to my regularly scheduled vacation.
Posted by SUSAN RUSSELL at 1:19 PM

I recall a comment from an English evangelical about how our American Cadillac lifestyle made our witness to the Gospel less credible. Now, that is a chosen lifestyle, chosen at great cost to others.