Everything I Ever Needed Know I Learned .... 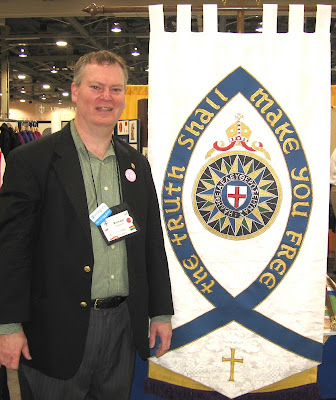 I know some people learned everything THEY needed to know in Kindergarten, but it took me a little longer. Of course I'm still learning -- daily -- but the core learning ... the deep knowing ... of both the cost and promise of speaking truth to power EVEN in the church -- that I learned in large part from my friend, brother priest and mentor -- Integrity's past-President the Reverend Michael Hopkins.
.
And so, as we settle down to engage -- once again -- in the privilege of doing this work we're called to do here in Anaheim at the 76th General Convention of the Episcopal Church, I want to make sure you all get a chance to learn from him as well by sharing these reflections from his blog "From Glory into Glory:"
It's About More Than Justice
by Michael Hopkins

One of the caricatures of the movement for full inclusion of gay, lesbian, bisexual and transgender persons in the Episcopal Church is that for us it is all about justice. It is about justice, of course, but it is also about far, far more. It is about the very nature of Gospel.

“The Gospel” can be defined in as many ways as there are Christians, of course. Jesus didn’t give us a neat definition with which to work. He did say it was about the ability to change one’s mind, one’s sense of direction (“repent and believe the good news”). But for the content of this good news he used the metaphor of the kingdom of God and told a lot of stories. In the end he acted out one great story with his life and his death. Overall, the good news is about the overcoming of estrangement, reconciliation between God and humankind and between human beings. We all have to trust in his death and resurrection for this reconciliation to be the truth that sets us free. This freedom is grace, as we call it, unmerited favor.

The inclusion of glbt people in the life of the church is a radical sign of this grace. People whom the law separates from the faithful are reconciled by it. And this happens in spite of religious and secular authorities desiring for it not to be so. They fear the breakdown of society if the inclusion goes too far too fast, but it has always been thus with the Church, which at its best has always scandalized the authorities, because Jesus Christ was and is the greatest scandal of them all.

That’s what this is about. This is not about a group of people clamoring for their “rights.” It is about the power of the Gospel to reconcile across every divide that humankind creates.

As a Christian who happens to be gay, St. Paul’s words that we will hear the Sunday after General Convention is over (July 19) ring true and strong.

But now in Christ Jesus you who once were far off have been brought near by the blood of Christ. For he is our peace; in his flesh he has made both groups into one and has broken down the dividing wall, that is, the hostility between us. He has abolished the law with its commandments and ordinances, that he might create in himself one new humanity in place of the two, thus making peace… (from Ephesians 2:11-22)

To this truth, by the grace of God, the lives of glbt Christians bear witness.
Posted by SUSAN RUSSELL at 7:49 PM