Agnostic feels a tug after Sunday in church 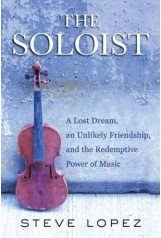 Los Angeles Times columnist Steve Lopez was the speaker last week in the All Saints Church Rector's Forum. He was talking about his new book -- The Soloist -- which is about to be a movie starring Robert Downey Jr.

ANYWAY ... it was an extremely moving Forum presentation (the book is subtitled: "A Lost Dream, an Unlikely Friendship, and the Redemptive Power of Music" and you really owe it to yourself to watch the video of the presentation here ...) and I left thinking, "Wow! A columnist who speaks as well as he writes" Steve Lopez had made QUITE an impression on All Saints Church!"

Turns out the feeling was mutual -- as evidenced by these excerpts from his column in today's Los Angeles Times:

"Agnostic feels a tug after Sunday in church"
by Steve Lopez

I'm coming up on 40 years of slogging through life without any religious affiliation, and for the most part, I have no regrets. Last Sunday, though, I was standing before a couple hundred members of All Saints Episcopal Church in Pasadena and found myself envious ...

Could my stubborn resistance to faith be slipping? No way, I told myself after leaving the church. Religious fervor has done an awful lot of harm in the world, dividing people, sparking wars, producing an endless parade of charlatans and hustlers.And just look at how religion is playing out in the presidential campaign, with the running battle over which candidate is linked to the worst and most hypocritical human being who claims to speak for God ...

I spoke about all of this with my wife, whose beliefs and non-beliefs are similar to mine. She mentioned that our daughter, just shy of 5, had asked a couple of questions lately about people who practice different faiths and what it all means.

I've always felt that what we believe in and how we live are the only forms of spiritual guidance we need to give our daughter. But maybe that's the lazy man talking -- the one who used to skip Catholic church on Sunday and watch ballgames on TV instead.

Maybe it wouldn't hurt, my wife and I agreed, if we were to show our daughter that our values are important enough to us to clear time and to celebrate and honor them in a ritualistic way.

I don't know that either of us is ready to make a decision about all of this, but I did go back to All Saints a few days after my appearance at the Rector's Forum to mull things over with the Rev. J. Edwin Bacon Jr ...

"Martin Luther King is my north star," said Bacon, who grew up in Georgia. As a young man, he met King, whose work he calls a "prophetic vision, a blend of spirituality and justice, spirituality and peace."

"What Jesus offers is a voice that says God loves the whole world and believes in redemption," Bacon added, "with equal love for both the oppressor and the oppressed."

"There is something bigger than me, and it's love. There's a spiritual force that's greater than evil or war. It's in me, and there are things I can do to activate it."

When I asked Bacon why I couldn't activate it from home, the lazy man way, he said I'd already answered the question when I told him about the spirit of community I'd felt last Sunday. He said his friend Bishop Desmond Tutu calls it ubuntu. "It's an African word meaning you can't be human alone."

I'm going to think about all of this, along with my wife.

"There are Jews, Muslims, Hindus and atheists here almost every Sunday," Bacon said, as if to put my mind at ease.

During his battles with the IRS, an atheist sent him a check and said:"I don't believe in God. But if I did, I would want to come to your church."

So not that I'm keeping score or anything, but ...

That would be 58 new Episcopalians at Confirmation on Saturday, 9 new Christians baptized into the Body of Christ this morning plus 1 agnostic "feeling a tug" in the Sunday Times. Not a bad week at work in the fields of the Lord, I'd say! (Who says liberals can't evangelize!)

Yep. We had 8 new members admitted to the church on Sunday. Young and old. This in a church with the average Sunday attendance of 60+. Yep. Us liberals are going to make it after all.