Rachael Ray's Dunkin' Donuts ad gets pulled because (wait for it!) .... she appears to be a terrorist sympathizer.

(May 29) -- Rachael Ray has been called many things -- loud, brash, elementary, and so forth -- but we're pretty sure this is the first time we've heard her name and "terrorist" in the same conversation.Dunkin' Donuts has pulled an ad featuring the Food Network star after concerns grew about a scarf she wears during the commercial, the pattern of which bears resemblance to a keffiyeh, the traditional headdress that Arab men wear.

The scarf has enraged conservative Fox News pundit Michelle Malkin and some others. 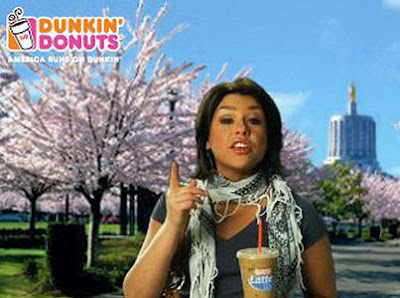 Funny how a "Fox pundit" suggesting that Osama & Obama are equal opportunity candidates for assasination doesn't get that much attention.
.
Or maybe "funny" isn't the right word. Ya think?
.

PS -- According to the NYT: "Dunkin’ Donuts turned down a request to talk about the episode, but issued a statement. “In a recent online ad, Rachael Ray is wearing a black-and-white silk scarf with a paisley design,” it said. “It was selected by a stylist for the advertising shoot. Absolutely no symbolism was intended.”

Posted by SUSAN RUSSELL at 7:34 AM

Best post I've seen about this is on John Scalzi's blog Whatever. The man pulls no punches when confronted with idiotic nonsense from "pundits" like Malkin...

I always had a feeling Rachael Ray was a menace... I just thought it was her pot roast.

You have to worry about any woman who uses knives with orange handles.

Dear heaven, even for American loonies, the idea that a woman who is about cooking well is somehow supporting al Qida!

Besides, the scarf is a pasely!