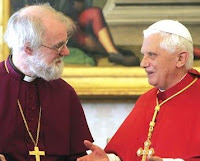 The "early reviews" on yesterday's meeting between the Archbishop of Canterbury & Pope Benedict appear to bode well for the "small c" catholic church:

From the Anglican Communion News Service:
The Archbishop of Canterbury, Dr Rowan Williams has described his private meeting with Pope Benedict XVI yesterday in the Vatican as'friendly and informal'. They spent almost half an hour in the Pope's study discussing matters of common interest.

From the UK Guardian:
Despite his conservative views on women priests and homosexuality, Pope Benedict appears determined to bolster Williams's leadership in the name of Anglican unity.

From Episcopal Cafe:
The message ... appears to be that Rome is sticking with Canterbury as the locus of authentic Anglicanism and wants nothing to do with GAFCON, even with the presence of women clergy and bishops and gay bishops. This makes the plans for a non-Canterbury centered Anglicanism focused on the "global south" appear to be more and more a lonely outpost far from the heart of catholic unity.
Posted by SUSAN RUSSELL at 10:54 AM

The message that TEC wants to pay attention to is not the one from Benedict. It is the message from Cardinal Kasper that will have the most impact on the Anglican Communion: http://www.catholicherald.co.uk/articles/a0000273.shtml

I would hope the AC would opt for the 21st century since it is the one we live in. We aren’t the folks who denied the truth of Galileo for centuries or covered up an in-house sexual abuse scandal for decades. Churches of the first millennium and the 16th century would have maintained apartheid in South Africa. Should Desmond Tutu have done the same?

His (Cardinal Kasper’s) comments will be interpreted as an attempt by Rome to put pressure on the Church of England not to proceed with the ordination women bishops or to sanction gay partnerships, both serious obstacles to unity.

Why do his comments need to be “interpreted?” Why can’t he bring himself to utter the words “gay” or “women?”

"We hope that certain fundamental questions will be clarified at the conference so that dialogue will be possible.”

I don’t know how “certain fundamental questions” become clarified without dialogue first and I don’t see how dialogue is possible or productive if Gene Robinson and Peter Akinola aren’t at Lambeth.

The Rt. Rev. Gene Robinson’s attempted civil union has “angered conservative Anglicans?” Well, the murder of a gay 15-year old boy by a classmate in a school room not an hour’s drive from my home has angered me.

Rebel conservative bishops, headed by Archbishop Peter Akinola of Nigeria are “dismayed” by the Archbishop of Canterbury's refusal to condemn homosexuality outright?

They may as well be dismayed by his failure to condemn type B blood or leprosy. Both are relatively uncommon and obviously have no moral component. Likewise, sexual orientation. People in the first millennium and the 16th century didn’t know this. We do. We can continue to sanction bigotry and ignorance as a church or we can refuse to continue to do so.

"from the tyranny of the Bishop of Rome and his detestable enormities, Good Lord deliver us."