Mildred Loving's obituary ran in the May 17 issue of "The Economist" ... poignantly illustrating how far we've come as a nation committed to liberty and justice for all in the very week we here in California took another step forward toward that goal.
. 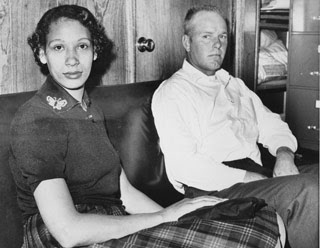 THEY loved each other. That must have been why they decided to get their marriage certificate framed and to hang it up in the bedroom of their house. There was little else in the bedroom, save the bed. Certainly nothing worth locking the front door for on a warm July night in 1958 in Central Point, Virginia. No one came this way, ten miles off the Richmond Turnpike into the dipping hills and the small, poor, scattered farmhouses, unless they had to. But Mildred Loving was suddenly woken to the crash of a door and a torch levelled in her eyes.

All the law enforcement of Caroline county stood round the bed: Sheriff Garnett Brooks, his deputy and the jailer, with guns at their belts. They might have caught them in the act. But as it was, the Lovings were asleep. All the men saw was her black head on the pillow, next to his.

She didn't even think of it as a Negro head, especially. Her hair could easily set straight or wavy. That was because she had Indian blood, Cherokee from her father and Rappahannock from her mother, as well as black. All colours of people lived in Central Point, blacks with milky skin and whites with tight brown curls, who all passed the same days feeding chickens or smelling tobacco leaves drying, and who all had to use different counters from pure whites when they ate lunch in Bowling Green. They got along. If there was any race Mrs Loving considered herself, it was Indian, like Princess Pocahontas. And Pocahontas had married a white man.

The sheriff asked her husband: “What are you doing in bed with this lady?” Richard Loving didn't answer. He never said much for himself, being just a country bricklayer with a single year of high school behind him. Mrs Loving had known him since she was 11 and he was 17, a gangly white boy who took her out for years and did the decent thing when he got her pregnant, by asking her to marry him. She thought he might have known that their marriage was illegal—a strange marriage, driving 80 miles to Washington, DC, to be married almost secretly by a pastor who wasn't theirs, just picked out of the telephone book, and then driving back again. But they hadn't talked about legalities. She felt lucky just to have him.

She told the sheriff, “I'm his wife.” And Mr Loving, roused at last, pointed to the framed certificate above the bed. “That's no good here,” Sheriff Brooks said.

Mrs Loving had said the wrong thing. Had they just been going together, black and white, no one would have cared much. But they had formalised their love, and had the paperwork. This meant that under Virginia law they were cohabiting “against the peace and dignity of the Commonwealth”.


It was a felony for blacks and whites to marry, and another felony to leave Virginia to do so. Fifteen other states had similar laws. The Lovings had to get up and go to jail. “The Lord made sparrows and robins, not to mix with one another,” as Sheriff Brooks said later.

Faced with a year in jail or exile, they chose to go to Washington for 25 years. Mrs Loving hated it. She was “crying the blues all the time,” missing Central Point, despite the fact that they would slip back there in separate cars, first she and the children, then Richard, casually strolling from opposite directions to meet and embrace in the twilight. Only Sheriff Brooks cared that they were married, and they avoided him.

But Mrs Loving wanted to return for good. When the Civil Rights Act was being debated in 1963, she wrote to Robert Kennedy, the attorney-general, to ask whether the prospective law would make it easier for her to go home. He told her it wouldn't, but that she should ask the American Civil Liberties Union to take on her case. Within a year or so, two clever New York lawyers were working free for the Lovings.


By 1967 they had obtained a unanimous ruling from Earl Warren's Supreme Court that marriage was “one of the basic civil rights of man”, which “cannot be infringed by the state”. The Lovings were free to go home and live together, in a new cinder-block house Richard built himself.

The constitutional arguments had meant nothing to them. Their chief lawyer, Bernard Cohen, had based his case in the end on the equal-rights clause of the 14th amendment, and was keen that the Lovings should listen to him speak. But they did not attend the hearings or read the decision. Richard merely urged Mr Cohen, “Tell the court I love my wife.” For Mildred, all that mattered was being able to walk down the street, in view of everyone, with her husband's arm around her. It was very simple. If she had helped many others do the same, so much the better.

She had never been an activist, and never became one. When June 12th, the day of the ruling, was proclaimed “Loving Day” as an unofficial celebration of interracial couples—who still make up only 4% of marriages in America—she produced a statement, but she was never a public figure. She lived quietly in Caroline county, as before. Her widowhood was long, after Richard was killed in a car accident in 1975, but she never thought of replacing him. They loved each other.
.

And may her soul, and the souls of all the faithful departed, rest in peace. Amen

.
UPDATE: The New York Times had a very touching obituary as well:
.
"Mrs. Loving stopped giving interviews, but last year issued a statement on the 40th anniversary of the announcement of the Supreme Court ruling, urging that gay men and lesbians be allowed to marry."
Posted by SUSAN RUSSELL at 6:01 PM

The New York Times had a very touching obituary as well.

Already moved by the story of their struggle and the conviction of their love despite what the world around them was saying, I really teared up when I read the last paragraph:

"Mrs. Loving stopped giving interviews, but last year issued a statement on the 40th anniversary of the announcement of the Supreme Court ruling, urging that gay men and lesbians be allowed to marry."

Yes, and thank you for giving the Lovings this space and prayer. We remembered her among the saints at the altar during communion here in Richmond VA the Sunday after her death. They are truly an embodiment of true love.

I didn't know all this. Thanks for the post.