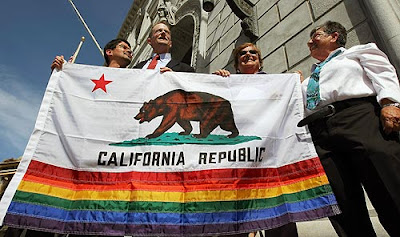 LOS ANGELES--Integrity applauds the California Supreme Court for ruling today that it is unconstitutional to bar same-gender couples from marriage.

"The California Supreme Court today ruled in favor of marriage and against bigotry," said the Reverend Susan Russell, President of Integrity. "Integrity is proud to have signed the interfaith amicus brief that helped influence this decision, which we celebrate as a giant step closer to "liberty and justice for all."
.
Russell continued, "In 1976 the General Convention of the Episcopal Church passed a resolution expressing its conviction that 'homosexual persons' are entitled to equal protection of the laws with all other citizens. We applaud those who are working hard at the state and national levels to make that equal protection not just a resolution but a reality and we salute today's decision as a huge step forward toward that goal."

"Although same-gender blessings are permitted by the Episcopal Church and are performed in a many dioceses and parishes, we believe the time has come for an official rite for blessing same-gender couples. Committed to the full inclusion of all the baptized in all the sacraments, we will be asking General Convention to authorize such a rite a year from now in Anaheim."
.
PDF of decision here
Posted by SUSAN RUSSELL at 11:28 AM

jonhn ... and what would that look like to you?

Bravo, CA! It almost makes it worth the exhorbitant cost that it takes to live there!

Susan, I think every Bishop needs to come out with a clear, unequivocal denunciation of the ballot initiative. We all know what the Roman heirarchy will do, not to mention the Mormons and most of the more conservative protestant denominations. I understand the potential for IRS problems, but if they can do it - and they will - so must we. We simply cannot afford to have the impression created that "Christians" are uniformly supporting the ballot initiative.

On a personal level, looks like I'm going to have to write more checks, as I hope everyone who is able to will.

The ballot measure is an issue, not a candidate. while I am not an attorney, it is my understanding that an exempt organization can take a stand on issues without crossing the line; just not candidates. So, yes, we need to speak out.

I hope you're right, Gerti.

We not only CAN speak out, some of "us" already are ... including the bishops of Los Angeles and California.

As for the IRS, trust us ... folks from All Saints, Pasadena are WELL versed in where "the line" is ... and advocating for marriage equality is WAY this side of it.

I saw the headline in this morning's LAT "Religious view" or somesuch thing, directing readers to an article about an evangelical couple who opposes gay marriage. I am about to write a letter to the editor complaining that the headline is misleading. First, there are a variety of "religious" views and, second, why must they always confine their reporting on "religious" views on this issue to the Cardinal and the first conservative evangelical they can get their hands on. We need to be very vocal against the impression that God is on the other side.

And while I have your attention, Susan, I was thumbing through the Prayer Book yesterday and came across the liturgy for "The Blessing of a Civil Marriage". With minor amendments removing gender-specific references (as we at my parish say "it is right to give God (not "Him") thanks and praise"), doesn't it pretty much address the situation we will have in California in another twenty-nine days?