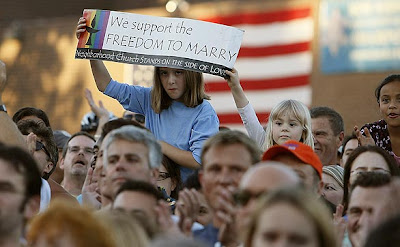 From Walking With Integrity ...
While yesterday's positive action by the California Court was not completely unexpected, I think it is safe to say the scope of the ruling surpassed what had even been hoped for. For those unfamiliar with the journey we've traveled to this point in California on the issue of marriage equality, here's a note from Integrity's Field Organizer, Jan Adams:
We need to kill the meme that this decision has anything to do with "judicial activism." The legislature, twice, has passed bills approving gay marriage rights. That's legislative action. The only reason those bills did not become law is that the Governor, the executive, vetoed them, deferring to the Court.
.
Now that the Court has spoken, the executive says he will not oppose the decision. Gay marriage has made the rounds of the system and jumped the normal procedural hurdles. Now we may need a vote of the people -- a campaign we are forced to struggle through. But that will only be AFTER we've played by all the rules. Our opponents want to change the rules because they don't like the outcome the rules have rendered.
.
Sounding vaguely familiar? Why yes it is -- because it's the same "change the rules when you don't like the outcome" strategy the schismatics have used in the Episcopal Church, attempting to shift the debate they lost on the American Church playing field to the global Anglican Communion.
.
Speaking of the church, I'm getting questions about what this all means for the Episcopal Church in general and for Integrity's legislative agenda toward General Convention in specific. This morning I was interviewed by a reporter who asked about our plans for GC09 ... would we now be "pushing for marriage?"
I told her that our goal was the full inclusion of all the baptized in all the sacraments and marriage equality was certainly part of that goal.
AND, as there were a variety of ways to reach that goal, we would be continuing to be open to how the Holy Spirit was going to work to lead us there. There are a number of different resolutions already wending their way toward Anaheim, we're working hard with allies in both the House of Deputies AND the House of Bishops to move the Episcopal Church forward and we're confident there will be forward movement.
I told her that I am convinced that the decision yesterday by the California Supreme was a huge step forward toward "liberty and justice for all" in the civil arena and that I'll be looking for the Episcopal Church to "go and do likewise" and take another step forward toward the full and equal claim it has promised the gay and lesbian faithful since 1976.
.
Posted by SUSAN RUSSELL at 12:37 PM

The laws of California provide for ballot initiatives from the citizens, so when a petition is signed by a sufficient number of people, it goes before the citizenry at an election for a vote. There is an initiative to amend the state constitution to define marriage as the union of a man and a woman.

It is not "breaking the rules" for this to come before the voters, because it is part of the law. It may pass; it may not -- but it is quite legal.