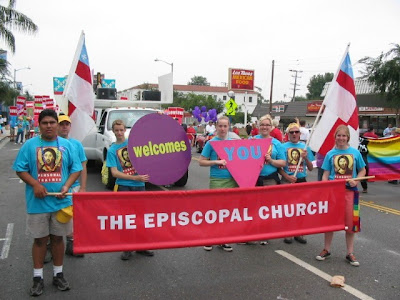 From the OHC Lectionary Blog, this witness from the sermon preached last Sunday at St. Paul's, Tustin CA:
.
I prayed to ask God if there really could be a Christian church out there that would truly accept me, as the traditional hymn says “Just As I Am.” It was about this time I began hearing in the national news about the stir being caused by the Episcopal church ordaining a gay bishop.
.
I knew absolutely nothing about the Episcopal church but I truly felt joy in hearing this news. For me and hundreds like me it was not just national news--it was Good News."
Then something quite amazing happened. I had moved back into the West Hollywood area and it was June. Time for the annual gay parade.
Now this is an event that I personally run from. I found it pedantic. But when you live just one block from Santa Monica Blvd you have to give in to the tens of thousands of people who show up for a visit. Having secured my parking space for the weekend I wasn’t going to give it up under any circumstances.
So on that June Sunday I walked the 2 blocks from my home to Santa Monica Blvd to be a casual observer of the day's celebration.The Gay Pride Parade offered every group and organization you would expect. But there was one group that took my breath away.
In this wild and party atmosphere I looked down the boulevard to see literally hundreds of smiling, peaceful Episcopalians carrying signs saying "God loves you and we welcome you." It was a very powerful moment for me. And one that gave me courage to tiptoe back into a Christian church."
.
Posted by SUSAN RUSSELL at 6:08 PM

And if you are in the crowd when the church contingent marches by, look around you, You will nary see a dry eye.
That says a great deal about the power of the evangelism of action. God bless those who welcome.

continue the work to make the church a door way, not a stumbling block.

Wow Susan+
what powerful witness!
thanks to the link you provided I read Charles' complete text at the OHC Lectionary.
so many lessons embedded in his story- not the least of which the limitlessness of Chirst's love and grace
Thank-you Susan +