Commentary on the California Marriage Decision 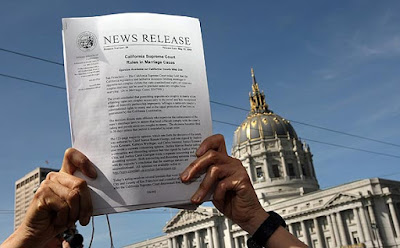 I'm elevating this commentary from comment-land because it is such a concise, encouraging and clearly stated summary of "what the deal is" with yesterday's California Supreme Court decision. Thanks, Bruce ... you rock!
==========
The amazing thing about the opinion, much to the dismay of the religious right I'm sure, is just how conservative it is. I well remember the decisions that came out of the Rose Bird court many years ago, that frequently strained logic and common sense, but this opinion is actually a well-reasoned and rational application of precedent and the law as it exists under the California state constitution.

There is no judicial innovation here, just the recognition that, under well established law, marriage is fundamental right and that for a statute abridging that right to pass constitutional muster, the government must demonstrate a compelling state interest served by that restriction.

I am certainly no fan of judges who usurp the proper function of the Legislature (the primary concern of the dissenters here), but this decision simply acknowledges that the present statutory scheme creates two systems under which the State of California recognizes this type of permanent relationship between couples, giving one the time honored and respected name of marriage and the other the sterile, bureaucratic-ese name of "domestic partnership."

One is clearly preferable to the other (ask any fundamentalist which they would prefer)and under California law, at least, offering the first arrangement to one group of people while not offering it to another, violates the constitutional requirement that, for the most part, people must be treated the same.
Posted by SUSAN RUSSELL at 8:53 AM

We need to kill the meme that this decision has anything to do with "judicial activism." The legislature, twice, has passed bills approving gay marriage rights. That's legislative action.

The only reason those bills did not become law is that the Governor, the executive, vetoed them, deferring to the Court.

Now that the Court has spoken, the executive says he will not oppose the decision.

Gay marriage has made the rounds of the system and jumped the normal procedural hurdles. Now we may need a vote of the people -- a campaign we are forced to struggle through. But that will only be AFTER we've played by all the rules. Our opponents want to change the rules because they don't like the outcome the rules have rendered.

My partner,my priest and I danced in the Church parking lot yesterday. My partner and I are preparing for our July Celebration & Blessing of Relationship at our parish here in Utah. I was born and raised in Orange County, Ca. I know a "Civil Marriage in Ca." would not have the same spiritual significance as our blessing by the church--yet, even though it would not be valid here in Utah, I want to come to Ca. and get married. I want, for a brief crack in time, to be equal. What is THAT going to feel like? I can hardly wait to find out!