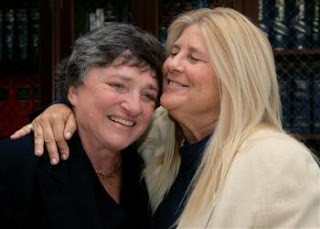 Over at The Huffington Post our friend Robin Tyler -- one of the plaintiffs in the suit that resulted in last week's landmark marriage equality ruling -- offers a moving, personal reflection on the hopes and fears of those who aspire to the sanctity of marriage.
.
You'll want to read the whole piece (linked above) -- but here are some excerpts posted below. And do keep Robin & Diane and all those hoping for happily-ever-after in your prayers as this drama continues to unfold. (See also: "Shield the joyous.")

My Reaction to the California Marriage Ruling -- by Robin Tyler

There is no such thing as same-sex marriage, because after marriage, sex is never the same.

Despite that, on May 15, the day the California Supreme Court ruled that my partner, Diane Olson, and I could get married, I e-mailed my brother Robert, who was traveling in Spain with his wife, Maureen. We had won! Could they come to our wedding?

It wasn't going to be until June 16, the first day it would be possible because the court had ordered a 30-day delay so the state's marriage application forms could be changed to read "spouse and spouse" instead of "husband and wife."

Thirty days? How was I going to lose 30 pounds in 30 days? Obviously, I couldn't, so I decided to leave myself alone. No, I wasn't going to diet. This was going to be the most joyous month of my life and if I wanted to have desserts, so be it.

The e-mails began pouring in. My friend Jan, a lesbian who lives on Fire Island, New York, wrote that she and Edrie, her partner of 49 years, were coming to Los Angeles to get married. They wanted to get married at the same time as two other long-term older couples -- Marilyn and Jean of Los Angeles and another couple who live in Cherry Grove, N.Y.

I explained to Jan that their California weddings would not be recognized in New York. I told her that although no residency was required to get married, if they decided to get divorced they would have to live in California for six months. "So what!" said Jan. "After 49 years together, we don't think we will be getting divorced."

None of these six women, most in their 70s, some in their 80s, had ever dreamed that in their lifetimes it would be possible for them to get married. For them, it wasn't about the benefits. For the New York couples, there wouldn't be any.

It was about the word "marriage" -- the word that gives the relationship of two people in love a special meaning. As Diane says: "Marriage is a universally understood word defining a unique and distinct loving relationship between two people."

After 15 years together, and 20 years before that as friends, Diane and I were finally getting married! It was the most joyous week of my life. And then, on May 22, our attorney Gloria Allred e-mailed me an Associated Press news story headlined: "California Marriage Opponents Seek 5-month Delay."

When I finally got to bed the evening of May 22, Diane, emotionally exhausted, was already asleep. I wanted to wrap my arms around her but I was afraid of waking her. I lay there, while the pain poured over me. I wanted to believe that this would work out.

Surely, once the public saw the joy on the faces of all of the same-sex couples getting married in California, and saw that nothing was going to be taken away from their own marriages, they would not vote for a mean-spirited constitutional amendment that protected nothing except the right to discriminate.

If only the California Supreme Court would deny the petition, we would stand a fighting chance of defeating the amendment and realizing our dream.

Robin Tyler is the comedienne & activist who's portfolio includes this memorable quote: “Fundamentalists are to Christianity what paint-by-numbers is to art.” (AP Photo/Nick Ut)

Posted by SUSAN RUSSELL at 9:03 PM

Actually, no, an appellate court in New York ruled that same-sex marriages legally enacted in other jurisdictions (Massachusetts, Canada, and now, California) are valid in New York, even though the state does not itself currently issue marriage licenses to same-sex couples. The longer explanation is that the top court in New York ruled that it was the proper role of the legislature to determine whether same-sex couples could marry *in* New York, a goal former Gov. Eliot Spitzer had promised to pursue before his unfortunate, self-inflicted political demise. I do not know whether Gov. Paterson shares the same commitment. However, when same-sex couples who had been legally married outside of New York sued to get their relationships recognized, the court found that there was currently no law preventing such recognition. So those nice ladies from Fire Island should trot on out to Palm Springs or wherever and get hitched -- BEFORE NOVEMBER, just in case!

Really, that is unfair to paint by numbers.

Disclaimer and clarification to the above: I am not a lawyer, and the recognition of out-of-state same-sex marriages in states where such marriages are not banned outright, such as in New York, is hardly what one could call "settled law." Non-California residents seeking to marry with the idea that their marriage will be recognized in their home state should consult with an attorney to be sure they are advised of all possible ramifications.

Updating my comments from earlier, this just in from The New York Times: New York to Back Same-Sex Unions From Elsewhere.

So, I guess that settles that! Woo-hoo!