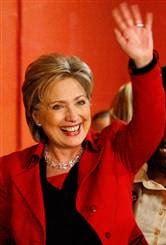 Thanks to Louise, for pointing me to this very thoughtful piece posted by Arianna Huffington today:

From the article:
It is to her great credit that very shortly into the '08 race, when you saw Clinton on television, you didn't think, "Oh, there's the woman running for president." That is no small feat for a woman trying to break into a male-dominated arena. So the next time a woman -- or two or three -- runs for president, it won't be seen as a novelty act. Because Hillary certainly wasn't.

But the greatest triumph of Clinton's campaign -- a complete triumph -- is the example she has set for the next generation. And not just for young women; her dedication, perseverance, and indefatigable drive make her a role model for young men as well.

As Sen. Obama pointed out in his speech last night, Sen. Clinton has made the future better for his own daughters and we all should thank her for her untiring efforts.