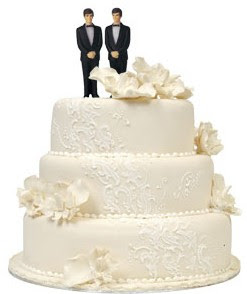 California's Supreme Court said on Wednesday that it would issue a long-awaited decision on Thursday on whether it is constitutional for the the nation's most populous state to bar gays from marrying.
.
Here's what Reuters had to say ...
.
A decision by the seven-judge panel -- expected at 10 a.m./1 p.m. EDT (1700 GMT) on Thursday -- could have significant impact nationwide on an issue that has divided communities across the United States.
.
... and there's this from Andrew Sullivan:
.
Those in favor of civil equality better get ready. The gay civil rights movement will never have waged a battle this big, this expensive or this important. We can win at the ballot box as well as in the courts and legislatures. And the good news is that the Republican governor has said he will oppose any initiative to take marriage rights away, if they are granted. Hold on tight.
.
Like Sullivan said ... hold on tight!
.
Posted by SUSAN RUSSELL at 4:51 PM

Seriously, I think I am going to throw up I am so nervous!

"...our state now recognizes that an
individual’s capacity to establish a loving and long-term committed relationship with another person and responsibly to care for and raise children does not depend
upon the individual’s sexual orientation..."

This is only one of several key passages in a verrry long brief, but IMO it's critical.

I just got on the internet and saw that the court overturned the ban! Hurrah! Thanks to all who have fought for this - another step toward marriage equality for all.

Now, we've got to defeat the ballot measure in November and this time, the Episcopal Church cannot sit on the sidelines. We know the Romans won't.