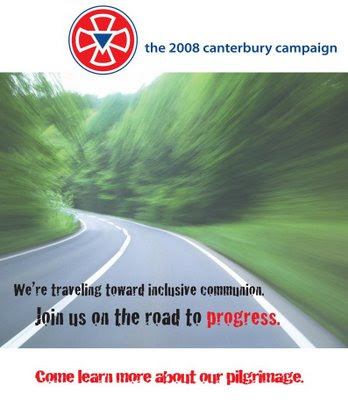 So I'm heading off for San Diego this morning for a Canterbury Campaign event but, before I go, thought I'd post up a few bits & pieces from around the blogosphere:
.
Episcopal News Service ran a follow up story to Thursday's California Supreme Court decision, which included:

Time for the church to be prophetic

The Rev. Susan Russell, president of Integrity, an organization of Episcopalians committed to full inclusion of lesbian, gay, bisexual, and transgender [LGBT] persons, called the ruling a huge step forward for "marriage and the sanctity and importance of marriage and against bigotry and separation."

She said it is now time for the church to "be as prophetic as the state of California has been."

"I am convinced the church should do no less. When we baptize, there are no conditions on those baptisms," Russell declared.

She recalled a friend whose comments are posted on her blog, who is a "Florida attorney, who happens to be a straight, white, male, libertarian-leaning-conservative Episcopalian" who called the court's decision conservative.

"There is no judicial innovation here, just the recognition that, under well established law, marriage is a fundamental right and that for a statute abridging that right to pass constitutional muster, the government must demonstrate a compelling state interest served by that restriction," her unnamed friend is quoted as saying.

Interesting how a comment on a blog can end up being featured in a national news story, eh? But wait ... there's more.
.
"Just Married" on Slate.com led with this:

"The amazing thing about the opinion, much to the dismay of the religious right I'm sure, is just how conservative it is," writes Susan Russell, an ordained Episcopalian minister and lesbian living in California, on her blog An Inch At A Time: Reflections on the Journey. "There is no judicial innovation here, just the recognition that, under well established law, marriage is fundamental right and that for a statute abridging that right to pass constitutional muster, the government must demonstrate a compelling state interest served by that restriction."

Hmmm ... got the quote right but not the writer! Go figure. Glad to see Bruce's analysis getting so much "air time" but also mulling how easily quotes get morphed, mis-attributed and otherwise messed with in the world of instantaneous communication and little or no "fact checking." (Just my word-to-the-blog-wise for a Saturday morning!)
.
In other news:
.
THIS SUNDAY: We are having a panel discussion on Sunday at All Saints to talk about the legal and electoral as well as the pastoral and liturgical implications of the court decision. Panel members will include attorney Bob Long, activist Dave Frick, and parish Peace & Justice director Lori Kizzia. Stop by if you're in the neighborhood ... we'll see if we can get it videotaped and up online.
.
It is also Long Beach Pride weekend and the Episcopal Church will be well represented in Sunday's parade -- lots to celebrate! Have a great weekend, everybody!
.
And now, hi ho, hi ho ... it's off to San Diego I go!
.
Posted by SUSAN RUSSELL at 8:22 AM

BTW if we are on the road to Canterbury on that side of the road...
just say'n!